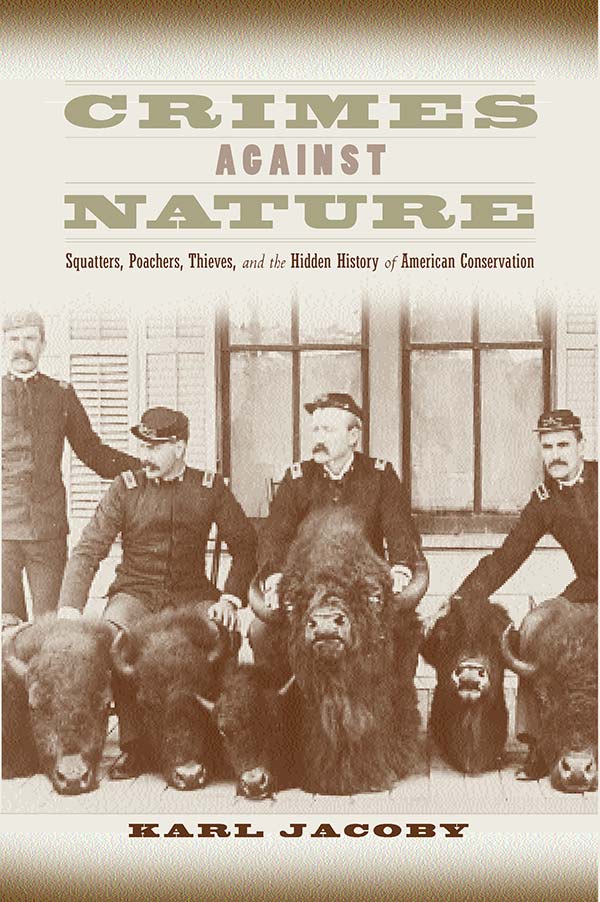 “A compelling new interpretation of early conservation history in the United States. . . . Powerfully argued and beautifully written, this book could hardly be more relevant to the environmental challenges we face today.”

“A well-conceived, solidly researched, and clearly written work with important conclusions but even richer possibilities.”

“Jacoby crafts a sympathetic portrait of the classes without the means to support their claims to the natural world, while dismantling some of the stereotypes and larger myths that have long enveloped the conservation movement.”

“This insightful and lucid book combines social with environmental history, enriching both. . . . Timely, eloquent, and provocative, Crimes against Nature illuminates contemporary struggles, especially in the West, over our environment.”

“Rarely has this level of originality, close reasoning, and historical texture been brought into such harmony while preserving the whiff of lived experience.”

James C. Scott, author of Seeing Like a State

“An unsettling study of early conservation, one that reminds readers that battles to save nature were also battles to colonize places and peoples…. This is an excellent and timely book.”

Squatters, Poachers, Thieves, and the Hidden History of American Conservation

Utilizing case studies drawn from three of the United States’ earliest and most prominent conservation sites—the Adirondacks, Yellowstone National Park, and Arizona’s Grand Canyon—Crimes Against Nature reveals how nineteenth-century efforts to control nature became irretrievably entangled with attempts at controlling the behavior of rural Americans. Viewed from the perspective of the inhabitants of the American countryside, conservation represented the imposition of a new legal framework on the natural environment, one that transformed many previously acceptable practices into crimes: hunting became poaching, for example, the cutting of timber, theft, and the setting of fires, arson. These dramatic changes enmeshed, in turn, a diverse array of rural folk, from Abenaki, Shoshone, and Havasupai Indians to poor whites in New York, Montana, and elsewhere. Before Crimes Against Nature’s novel blend of social and environmental history, such individuals had been virtually invisible in the scholarship on the American relationship with nature, which had focused instead on what the environmental historian Richard Grove once termed the “pantheon of conservationist prophets”: celebrated figures such as George Perkins Marsh, John Muir, Gifford Pinchot, and Theodore Roosevelt, who collectively laid the political and intellectual groundwork of the conservation movement.

Read an excerpt from Crimes Against Nature: Download PDF

More about the book